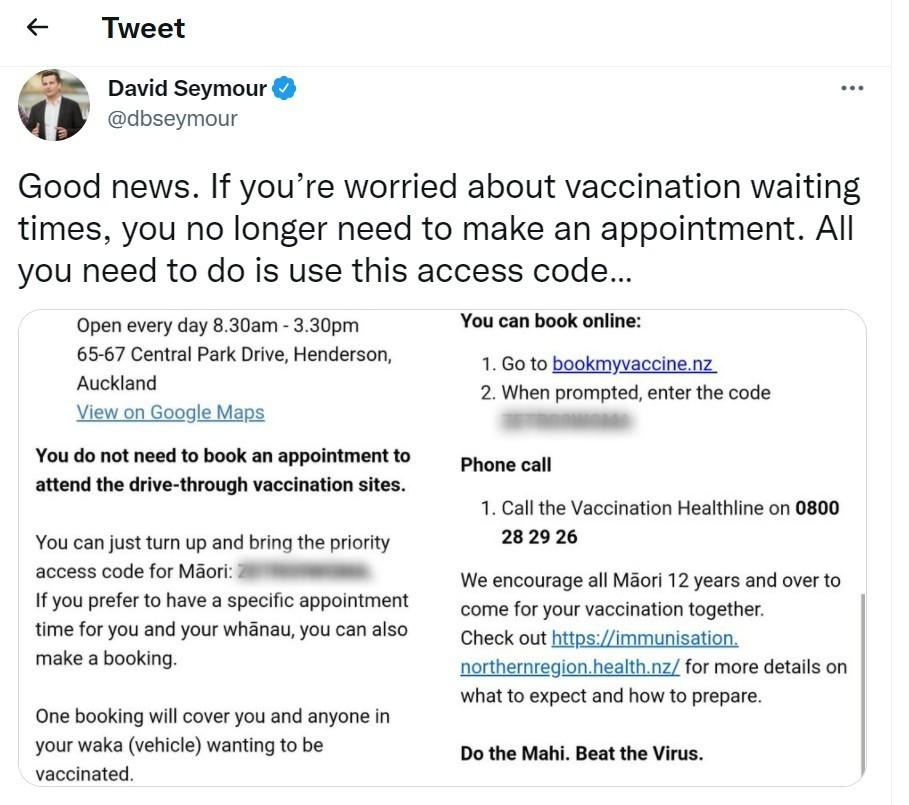 David Seymour, who currently serves as the party leader for ACT, has been criticized for publicly tweeting the priority access code that gives easy access to the Covid-19 vaccines for Māori. He included a caption that told his followers that they can simply use the code instead of booking appointments. Through this, people can simply get their vaccines through a drive-in clinic which is in West Auckland. It is currently operated by Waipareira Trust.

The act was criticized by fellow politicians Marami Davidson, who serves as co-leader of the Green party and Debbie Ngarewa-Packer, who serves as the co-leader of the Māori Party. Both considered it as a deliberate attack against the vaccine campaign for Māori, who have one of the lowest vaccination rates in the country. They considered it Seymour’s attempt to frame the Māori to be given priority by the government. Both also considered it as adding fuel to the divisive politics of the country.

The Māori have very low vaccination rates compared to Asian, Pacific-peoples, and other parts of the general population. Only one in five of their population that are eligible to be vaccinated received it. John Tamihere, who is the CEO of Waipareira Trust, defended the existence of the priority codes by stating that most of the Māori had no time for queuing for the vaccine because of the expense of gas as most of them were part of the working-class population. He also stated that most middle-class people were already taking their vaccination even without appointment. With the code, they can make sure that the Māori can also do this.

Seymour defended his actions in a media press conference by stating that he only revealed the existence of the codes so that the media would be aware of it. He called the code a way of “infantilizing” a sector of the population and ignoring the rest. He stated that the use of race as a way of determining the ease of getting the vaccine can cause inequalities among the people. He defends that his party list only wants to make sure that everyone gets equal access to the vaccination.

Ngarewa-Packer further criticizes the move by calling it a “racist” narrative to further paint the Māori to be given special privilege by the government. Davidson also accused Seymour of using the staff of Waipareira Trust as political pawns.

The Covid-19 minister declined to provide a statement regarding the issue. The Ministry of Health is yet to give a comment.