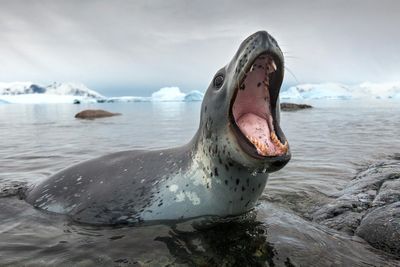 Dr. Krista Van der Linde, a senior writer of the study conducted, and works for Leopardseals.org, shares the discovery is awesome. The group that conducts the investigation of the remnants of leopard seals found in the animals’ poo, and utilizing DNA sequencing, concludes they found the remnant body parts of a shark.

According to Linde, she and the other members of a team of experts have discovered that leopard seals also eat elephant fish and ghost sharks. The elephant fish possesses big spines which aid in keeping them safe from predators. The leopard seals do have wounds, at times, big spines are etched in their faces.

Linde further states that large spines are sources of protection of the seals from predator animals. It’s not clear, however, why leopard seals hunt and eat sharks, given the fact that the latter pose danger when caught or hunted.

Dr. Ingrid Visser, Leopardseals.org co-founder and one of the study’s co-authors, has observed the behaviors of orcas for thirty years. Visser has witnessed orcas devour sharks on a regular basis. It’s unexpected, though, that leopard seals eat sharks, as well. The substantial amount of sharks’ bodily particles that the team of experts have discovered in the seals’ poo may be a sign that sharks are among the leopard seals’ important foods, according to Van der Linde.

According to the Department of Conservation, any person who comes across a leopard seal swimming is to leave it alone, and stay away from it. If the situation of a leopard seal imposes a risk on the public’s safety, or the seal itself is in danger or risk of danger, people have to call the DOC on the 24-hour emergency phone line at 0800 362468.

The existence of leopard seals in New Zealand’s seas is slowly developing.