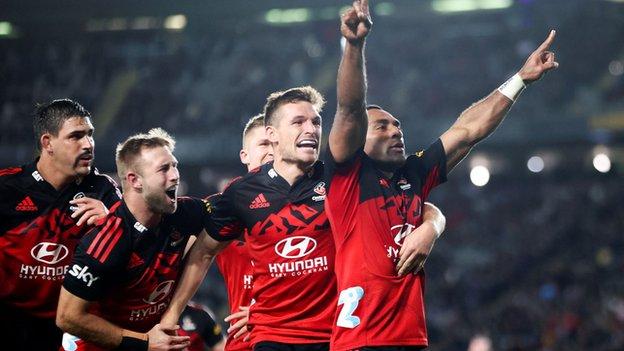 Thirteen titles in total, that’s how the Crusaders are currently standing after a magnificent performance against Blues in the Super Rugby Pacific finals.

With Scott Roberton leading the charge, the Crusaders are definitely in good hands. So far, they have garnered six titles in the span of six years, and it doesn’t seem like they will be stopped anytime soon. The finals concluded in front of a 43,000 crowd which was sold out in less than five hours.

With high hopes for Leon MacDonald’s coaching style, a lot of people are expecting to see a different outcome. However, the Crusaders crushed these expectations and showcased how true rugby is played.

Despite having some glimpses of hope for a comeback, nothing came to fruition as the score line started to widen. With Sevu Reece going for a second try, the game has definitely become harder for the Blues to come back.

So far, the Blues has been waiting for another title for 19 years, and what looks like a very hopeful final came crashing down. Still, it’s not over for the Blues just yet as there are plenty more opportunities to strike back, hopefully even stronger and better than what they showcased in the finals.

There has been an attempt to save the game by the coach, MacDonalds, like replacing Kurt Ekland with Soane Vikane, but it just feels a little off as the change could’ve been made earlier before the bleeding becomes unstoppable.

According to MacDonalds, it was indeed a tough matchup, adding that it is hard to play with Crusaders reading all their strategies. It’s like they’re an open book, and it’s hard to come up with an effective plan to take the lead.

MacDonalds also expressed how they can’t seem to land on a good footing, with no quality play balls coming their way.

Despite all the shortcomings from the Blues, we can’t shrug off the brilliance and dominance that the Crusaders displayed on that day. They were just better in different aspects of rugby, and they did it their own way. Richie Mo’unga is also someone to praise, being a dominant factor in the earliest part of the game.

Mo’unga was able to drive the Blues into a corner, using everything he has in his arsenal, displaying good rugby knowledge and also physical prowess.

As the final whistle was blown, the Crusaders celebrated a well-deserved victory while the Blues looked totally defeated, but it didn’t mean that everything for them was over. They might be going back to the drawing board, but at least this matchup has been meaningful, and they ought to pick up some lessons and apply them to the next season.