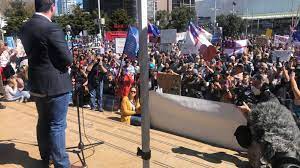 The protests happened over the weekend and were said to be pushed by recent lockdown measures taken by the government. Local authorities said that they were expecting this because of similar events in Melbourne, Australia.

Tamaki, who is aged 63, is reported to be summoned for questioning next week to answer questions about his involvement in the mass gathering. It can be considered a super spreader event because of the lack of proper adherence to safety protocols like social distancing and wearing of face masks.

Tamaki revealed his own identity by issuing a statement which says that he was surprised by the charges made against him. He was reportedly visited at his home where he made an agreement with the police to work in providing info about the event.

Tamaki will potentially face charges for breaching the order for alert level 3 which prohibits mass gatherings. He has also breached protocols held by the country’s public health response act. Under this, only 10 people is the maximum number of people for social events such as funerals and weddings. The protest was said to gather around 1000 people. It was composed of both children and adults.

The protest was made in collaboration with the Freedoms and Right Coalition. Locals criticized the members after they reportedly did not follow traffic rules after protesting.

Prime Minister Jacinda Ardern gave a heated response about the event, calling it a “slap in the face” for other citizens who have followed the rules of the alert level 3. Auckland is one of the worst-hit areas in New Zealand and is the only city under this.

Tamaki defended his action to be a protest against “oppressive laws”. He called it an exercise of freedom against “peaceful slavery”.

Shanan Gray, who serves as a superintendent of the police said that they are continuing their investigations to see potential charges and punishments to be given to proven offenders. They are taking note of the frustration of the community about the event yet advise them to continue current protocols to prevent further spread of COVID-19. She also says that they will be prioritizing the safety of the community during the lockdown.

She says that an agreement with the organizers was set in place before the event. However, charges are considered as they were unable to follow earlier-set agreements about how it will be performed.

They also remind that they have authority to enforce action against citizens who will be breaching health order protocols and restrictions.